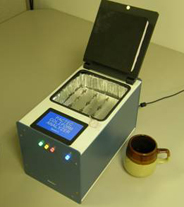 The Coliform Analyzer Instrument is an in vitro assay method and device that provides for detection and measurement of entities in a fluid sample that can be captured and concentrated in a unitized self-contained enclosed filter apparatus that is analyzed in an optical detection instrument for indications of the entity. It provides for analysis of biological material including cells, their enzymes, or other constituents thereof, that can be identified based on an indicator-generating means. The analyses provided for include detection of the presence of the entity, and changes in the entity over time, such as associated with growth and increasing metabolic activity with an expanding population of cells, or decreasing metabolic activity, for example, due to presence of inhibitory or toxic agents. The Coliform Analyzer Instrument has significant advantages over conventional test methods. Please call for more details.

Photonic BioSystems’ Sample Preparation Technology markedly improves the Membrane Filtration (MF) approach to microbiological sample analysis. It reduces the sample preparation time, minimizes risks of incidental sample contamination or cross-contamination between multiple sample setups, and reduces the volume of plastic disposables associated with each assay. This novel approach utilizes enclosed filter cartridges through which a fluid sample is drawn, organisms captured, rinsed, media introduced, incubated, and colony forming units (cfu) analyzed after outgrowth. All these steps are performed without opening the device, or involving any manipulations to transfer the harvested membrane sample from a filtration unit to another vessel for its culture and analysis. The Sample Preparation Technology can also be used with standard 47mm Filter Assay Cartridges (or any diameter filter) with an adapter accessory. More Info…

Utilizing negative pressure, to express fluid through the filter device, the Peristaltic Pump provides an efficient and economical means for initiating the sample into the Filter Assay Cartridge. The small unit has a flow rate of 100mL/minute which offers more than sufficient
capacity for conducting tests. In less than a minute a sample can ready for introduction into the Coliform Analyzer wherein sensing and detection immediately begins.

Each Test Kit contains all the necessary components to conduct a microbial contamination test. This includes: one Filter Assay Cartridge, one sterile plastic bag for holding the sample, one sealing cap, and 1mL culture growth media (composed of one vial of lyophilized media and one vial of 1mL sterile re-hydration water). All components are sealed in an airtight, sterile bag to ensure minimization of unintended sample contamination.

The case provided with the Coliform Analyzer system offers easy transportation of the instrument and components. Weighing in at just 35 pounds (with all the necessary equipment to conduct a microbial test), the case can be easily moved from location to location by a single person. Designed with rugged environments in mind, the case offers a protected means to transport the system without concern for damage. The case also contains a viewing window of the LCD display allowing test results to be obtained without removing the instrument from the case. For access to the Coliform Analyzer Instrument, simply unlatch both sides of the case and open the lid. 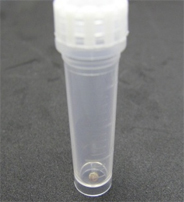 The proprietary lyophilized culture media was specifically designed for the rapid growth and detection of E. coli and other Coliform bacteria. With the combination of our Coliform Analyzer and Culture Media, we have developed a highly efficient, yet inexpensive system that rivals the most advanced detection systems available. While not currently EPA approved (expected Q4, 2012), this Culture Media has significant advantages over conventional media. 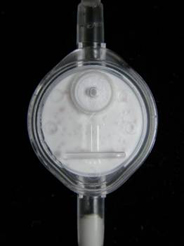 The 15mm diameter Filter Assay Cartridge (approximately the size of a nickel) provides many advantages over current testing devices. Completely enclosed, the FAC offers a protected environment which greatly reduces the possibility for sample contamination as well as cross-sample testing contamination. The FAC is capable of colony recovery which is a necessity for many microbial testing requirements. No matter the sample size (0.1mL -1000mL), the FAC concentrates and filters the sample in an effective and efficient manner. The FAC was designed to be used in conjunction with the Coliform Analyzer Instrument, but also functions as a simple, stand-alone test device. This feature allows for utilization in 3rd world countries to provide millions of people with an economical means to test water for bacterial contamination.

Similar to the 15mm FAC above, except offered in the more traditional 47mm membrane filter configuration.